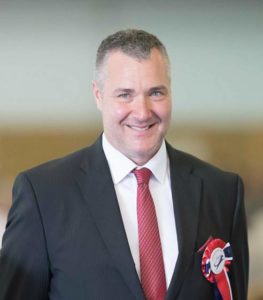 I was born and raised in Novi Sad, Yugoslavia, but I have been living in Budapest, Hungary since 2000. As for my profession, I run a dental clinic in Budapest where I work as a specialist in Periodontology and oral medicine. I had my first afghan hounds in 1986, and from that moment on I have been very passionate about the beauty, character, speed, and power of all sighthound breeds. I have been breeding afghan hounds for 15 years and I have had 13 afghan hound litters under the kennel name Ben Ben’s, FCI 2233. At that time, I established a dog magazine „Moj Pas” (My Dog). This was the first dog specialized magazine in Yugoslavia of which I was the chief editor for the first 4 years. Some 25 years ago I discovered a very special breed – Sloughi. I found the breed to be perfect for me. Since then I have been actively exhibiting the breed on dog shows and participating with my Sloughies on the Lure coursing. My judging career began in 1991, when I became a judge for all breeds in FCI group 10. Along the way I completed exams for groups 4, 5, 6, 7, and 8. In 2003 I also became a judge for Lure Coursing. Judging assignments have taken me to many prestigious shows around the world. I have judged dogs on national and international shows, club specialties, and Lure coursings in more than 30 countries across Europe, Australia, Asia, and North America. Finally, in 2017 I became a member of the board of judges of Hungarian Kennel Club.

I am actively taking part in education programs for judges, including presenting at club seminars about my two favorite topics: Mandibula angusta (inverted canines) and sighthound origin and types. Apart from my native Serbian language I am fluent in Hungarian, German, and English.