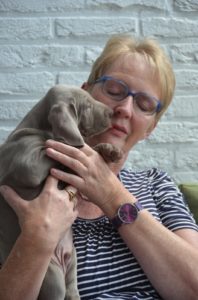 Since 1972 we have had dogs. Started with Dalmatians and since 1976 the Weimaraner, the breed we
fell in love when we met them for the first time in the kennel of the Three Turnip’s. We welcomed our first Weimaraner in 1976. My kennel affix “of the Grey Noble” was registered in 1977.
Our first litter was in 1980 and we breed on the average one litter a year.
I am also in possession of a Longhair.
More than 35 of our offspring are National or International Champions.
The first breed I was allowed to judge was the Weimaraner in 1991.
In Great Britain I judged 6 open shows, All Gun dogs and in 1992 the open show from the Weimaraner Association. (Entry 77).
At the 50th Anniversary of the Weimaraner Club of Great Britain in 2003 I judged the bitches
( entry 208). In 2007 at the Weimeraner Association Championship Club show the dogs ( entry more than 100) .
In 2010 I judged the Championship show of the Weimaraner club of Gauteng and the Championship show of the English Cocker Spaniel in South Africa.
In 2017 I had the honor to judge at the Weimaraner National in Australia. And the Championship show in Czech.
Now I am looking forward to judging our beautiful breed at Crufts in 2021.
Nowadays I often judge at International shows in the Netherlands and abroad
Many times I have judged different breeds at the Amsterdam Winnershow.
Also many Championships Club shows and open shows from different breeds, including the Weimaraner Championship Show.
In the past I have organized, for 10 years, the Club-show of the Dutch Weimaraner club. For approximately 5 years I was writing for the club magazine and was a co-writer of the first Dutch Weimaraner book.
In the regional Dog club (with around 2000 members ) I was a Member of the Committee and Vice- Chairman for 11 years. I worked on the club magazine for 24 years. For the last 25
years I have been a member of the Show committee of the biggest breed-club in the Netherlands, the
Labrador-club, ( around 5000 members), who organize every year a Championship
Show, with an entry of around 250 dogs. I am also more than 30 years instructor ring-training for our
area club and when I am not judging I am stewarding at Int.shows.
I am a FCI Group judge of group 7 and 8, BIS judge and judge some other breeds in group 10 (Barzoi, Whippet and Italian Greyhound) and Group 6 ( Dalmatians, Ridgeback and Beagle and Basset Fauve the Bretagne).
The last years I teach new confirmation judges and take the exams for the Dutch
Kennel-club.